Crane Game Eats Child?
OK, this is one of those proverbial “man bites dog” stories, if I ever heard one. 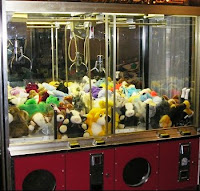 How can a kid get stuck inside a vending machine?
Only in Mad-Town.
Yesterday (on October 3rd), a nine-year-old Wisconsin boy may have become a bit antsy, while shopping at a WalMart store near Madison with his parents, identified as Mr. and Mrs. Hanson.
Hey, it happens.
Apparently, Mom and Dad handed the kid a few quarters and sent him off to play with the toy vending machine. Perhaps they hoped the Giant Claw game would keep the lad busy while they finished shopping or checking out with the Walmart cashier.
But the boy had another idea. He crawled through the toy-drop slot and into the Giant Claw machine. (That hole is about 1’ x 1’ – so no one seems to know how he managed it.)

Finding the nine-year-old inside the toy machine, along with the Beanie Babies and plush animal prizes, WalMart staffers called Sun Prairie firefighters to extract him. In fact, the kid seemed to be having so much fun in his own private plaything paradise that he seemed reluctant to come out.

"We actually tried to get his attention a few times 'cause he was playing, so I mean he was happy to be in there, but I don't think mom and dad were too happy," said Lt. Dan Cotter of the Sun Prairie Fire Department.
Finally, the offer of two take-home toys seemed to satisfy the Hansons’ son. As the boy exited from the Sun Prairie Walmart with his parents, folks could see the printing on the back of the youngster's tee shirt, which simply read:


'NUFF SAID.
Parents everywhere may be scratching their heads at that one. What would you say to a child who pulled a stunt like that in a store?
We have all heard of folks being caught with their hands stuck in cookie jars … but kids stuck in vending machines? Where’s Mr. Ripley when we need him?
Unbelievably, this sort of thing has happened before:
EMBED-How To Beat The Claw Game - Watch more free videos
Related Items:
Head First - a Rhyme to Scare Those on a Dare
"I dare you! I double-dog dare you!" What kid hasn't heard such words? Here's a story, told in light rhyme, of how one child learned to evaluate before reacting.
Colorado Man Busted for Break-in by His Own Kids
What happened when a Colorado man and his cohort tried to break into a home? An apparent would-be burglar in Colorado stumbled his way to an arrest. The alleged burglar encountered his own children after allegedly breaking and entering.
Our Sandy Surprise
Even during family gatherings at the beach, natural consequences may teach children important lessons of life. What happens when kids do not listen to adult instruction? Things can get a little scratchy.