How will you celebrate the 4th of July this summer?


Equestrians highlight 4th of July parades in Wisconsin in 2010

No American 4th of July Independence Day celebration is complete without a 4th of July parade. All over Wisconsin, equestrians and other parade... Keep Reading »
Games to Play at a Fun Fourth of July Barbecue

What fun Fourth of July patriotic games can you play at your party, barbecue, picnic or potluck? Here are a few of our favorites for your Independence Day entertainment.
Top Ten Songs for Fourth of July Parties and Barbecues

What fun Fourth of July patriotic songs can you play at your barbecue, picnic or potluck? Here are our top ten favorite Fourth of July songs for your Independence Day listening pleasure.
Fourth of July Fun Desserts and Treats

What fun Fourth of July desserts and treats can you offer at your barbecue, picnic or potluck? Here are some of our favorite July 4th dessert and treat recipes, sure to make guests march to the picnic table for heaping helpings.
Fourth of July Desserts and Treats

July 4th is a holiday for many purposes. Avid celebrants participate eagerly in marking July 4th as a most special day for so many different reasons. Here are several of the most popular July 4th holidays (arranged alphabetically).
July 4: Today's Notable Birthdays

Is July 4th your birthday? How will you celebrate this momentous occasion? With what notable individuals do you share your birth date?
Posted by LA Nickers at 10:18 AM No comments: Here's a news story about the Kellogg's cereal recall.
.

Share
Posted by LA Nickers at 9:28 AM No comments:

Eric Ripper, a celebrity chef, appeared on the set with a tray of prepared shellfish, which David Letterman then offered to Regis Philbin.

"I've looked at it once or twice, but it's not for Regis," Regis Philbin said. "Honest to God, I've very, very terrified of them. They don't look right! They look weird!"

"C'mon, you're such a wuss," David Letterman said to Regis Philbin. "Have a clam."


Hey, Regis. I won't eat shellfish, either. But I'm allergic - with anaphylactic allergies to shellfish. So I have, in effect, a doctor's excuse. (Back off, David Letterman. Even your celebrity chef can't entice me to indulge.)

Is the world your oyster? Do you love clams and mussels? How do you feel about caviar? Do you prefer lobster, crab or shrimp?
Posted by LA Nickers at 9:06 AM No comments:

Who's your daddy? Did you call him yet today? 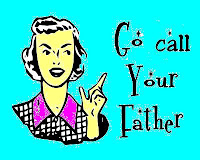 Let's be sure to wish all our fathers, grandfathers, stepfathers and other fine fatherly figures a Happy Father's Day today!

Happy Dad's Day all around!

An Indonesian family has lit a fiery debate by allowing their toddler to smoke cigarettes.

Two-year-old Ardi Rizal is addicted to nicotine. Just ask his dad, Mohammed Rizal (30), who spends at least two dollars a day to support his toddler son’s tobacco habit. Apparently, the young Sumatran boy has total tantrums when his parents threaten to cut off his cigarette supply.
(Ardi Rizal - smoking toddler - photo from The Money Times.)
Ardi Rizal’s mom, Diana Rizal (26), has said that she knows her son has a serious situation with cigarettes and that she is hoping to seek medical treatment for his chain-smoking problem.
Diana Rizal also confessed that she smoked cigarettes throughout her pregnancy with Ardi.

Parents (and others) around the world have buzzed furiously about the smoking toddler, Ardi Rizal. Many have criticized the chain-smoking two-year-old’s parents, who have admitted to allowing their son to pursue his smoking habit. Mohammed Rizal has confirmed that he gave his toddler son his very first cigarette (when the boy has about 18 months old).
Holy smokes!
Why would a two-year-old even be allowed to play with anything incendiary – let alone a smoking cigarette? And what about those young playmates, who breathe second-hand smoke from the smoking toddler?
Here’s the controversial video of the smoking toddler:
.