Porky Pig has taken an powder ... so to speak. 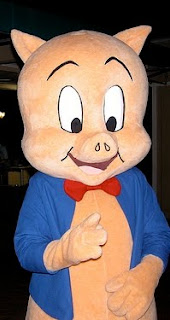 Two off-duty Six Flags Great America employees were ousted on July 14th from the Gurnee, Illinois, theme park after punching a female co-worker in a Porky Pig costume. The two young men, both from nearby Waukegan, Illinois, pounded the posing Porky Pig several times in the head – immediately after posing for photographs with the popular Warner Brothers/Looney Tunes  cartoon character.
Six Flags theme park security staffers stopped the melee and kept the two young adult males until local police showed up to arrest them on battery charges.
Porky Pig, portrayed by a 24-year-old Six Flags Great America employee, sustained several bruises, as well as a headache and stiff neck, from the incident. She was treated at a Six Flags Great America first aid office and released.

Surely, these employees need not be subject to assault.
How would you weigh in on the treatment Porky Pig received at Northern Illinois’ Six Flags Great America?