Rappin' up parenthood still schools moms and dads with humor

Often, it seems to be. From diapers to driving lessons, raising kids can be comical. 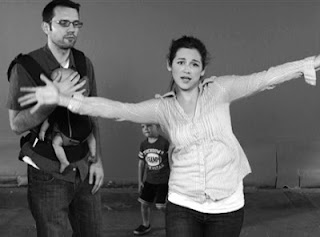 At least, folks who stop to consider the frequent foibles, mishaps, and perplexities of the process may find parent humor at nearly every turn. Sure, mothers and fathers can become exasperated, frustrated, and simply exhausted at times.

But it’s not hard to uncover ironic, comical, or downright hilarious opportunities to smile at precocious kids, chuckle over childish views of the world, or even laugh at ourselves while parenting.

If you have young children at home, you probably live it. Take a look … and a listen.

Blame it on Bart?

“The Simpsons” actually aired an episode titled “The Parent Rap,” as the Thirteenth Season premiere of the sarcastic Fox TV animated series in November 2001.

Can’t keep up with “The Parent Rap” lyrics?

“The Parent Rap” was created by Bluefish TV, an outreach of RightNow Ministries, a Christian organization based in Richardson, Texas.

Parental Perfection - a Rhyming Reel on a Parent's Ideal - What makes a perfect parent? Who can qualify for the title of parental perfection? Is it nature or nurture or nonsense? Here's a poetic look at real-life parenting.

Twitter etiquette: 20 tweets we'd like to trash - Twitter is exploding in popularity, as millions of internet users post 140-character messages on countless topics. Posts range from quips and quotes to candid photographs to wholly unfounded rumors to breaking news reports and more. Raise your hand, if you’d like to see a few matters of manners applied to Twitter.

Chicago schools to begin sex ed with kindergartners - A new sex education program has blown through the Windy City’s public school system, clearing the way for reproductive curriculum as early as kindergarten, at least in Chicago.

A Parent Puzzles at 12 Planking Alternatives - Planking isn’t the first fad to come and go. In fact, it’s not nearly the funniest or cleverest. Take a look at a dozen forms of planking. What’s next? A parent has to ask.

Teen boys: 20 ways to unimpress her parents immediately - Dating among teenagers and young adults changes with each generation, but basic parental expectations tend to still prevail. What mother or father wasn’t once a teenager, trying to navigate the complexities of the adolescent social scene?

Top Ten Tackiest Turnoffs when Talking with Adoptive Families - What is the most common complaint among adoptive parents? The adoption process can be challenging. Still, the biggest challenge adoptive parents face may be tacky questions and remarks they receive, often from seemingly well-meaning people.