Truckin' with Chili Can Be Hazardous to Your Health

Eating a cup of Wendy’s chili while driving through a residential area on Saturday morning (January 30th), the trucker began to choke and lost control of his rig. (Later, the truck driver learned from emergency medical technicians that he probably lost consciousness at the time.) 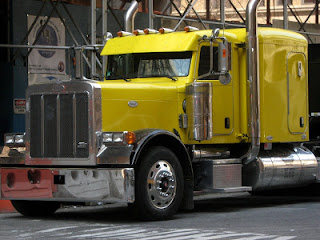 The truck blasted across a yard, through a white picket fence and into a home. Because the giant lumber truck smashed into the foundation of the house, emergency crews were concerned that extracting the vehicle might cause the structure to collapse.

The homeowner and children were away from the home at the time.

A woman who was inside the home at the time of the crash was uninjured, perhaps because she was in another section of the building. Emergency staffers rescued the woman through a bedroom window.

The truck driver suffered minor injuries. He was treated at a local hospital and released.

Here’s a video, posted by a local videographer, on the scene in Lowell, Massachusetts.
.
.