W is for Watching Out for White Rice

Is white rice wicked? Can too much of this simple carb cause diabetes?

Top medical researchers and nutritionists say it may. For at least three years, leading health experts have warned about the potential hazards of loading up on basic white rice.

Most of us already understand the push for whole grains, versus super-refined foods that may no longer carry substantial nutritional value. Clearly, over-consumption of simple starches and sugars is likely to up a susceptible person’s risk of certain forms of diabetes. 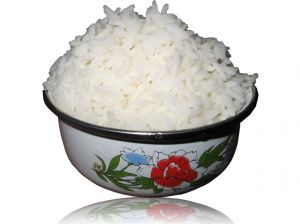 Common white rice, with the husks and hulls removed, may be one of the more refined and simplified carbohydrates in our food chain. Is it good for us?

Scientists at the Harvard School of Public Health conducted a 2010 study and discovered that those who ate white rice five or more times a week were significantly more likely to develop Type 2 Diabetes than those who didn’t. Those who ate brown rice, barley, or whole wheat grains instead experienced 36 percent fewer cases.

Five times a week? That’s a lot of rice.

Certainly, a reasonable helping of the popular starch may be fine, now and then.

Suppose you visit an Asian restaurant, for example, and you really want a bowl of white rice to go with your savory entrée. Or maybe you crave a bowl of spicy rice, while dining in a favorite Mexican eatery.  Perhaps you’ve had a bout with the flu, and all you can stomach is a bowl of chicken and rice soup.

Go ahead. Why not?

Now and then, a little white rice is not likely to make a difference. The health risk seems to creep in with frequent consumption, particularly in place of healthier, whole-grain choices.

Nutritionists across the board advise consumers that overindulgence in white bread, white potatoes, and plain white pasta may carry similar statistical outcomes. Cookies, crackers, pastries, and snacks made with white flour fall into the same family as well.

The stuff we crave really may be bad for us. Maybe that’s not a news flash, but it does remind us to step away from the snack aisle again and to reconsider healthy grains.